Cruciate repair for your pet – TPLO

What is TPLO Surgery?

TPLO is short for Tibial Plateau Levelling Osteotomy. This is a surgical procedure used to treat cranial (or anterior) cruciate ligament rupture in the knee joints (stifle) of dogs. It involves changing the angle of the top of the shin bone (the tibial plateau) by cutting the bone, rotating it, and stabilising it in a new position with a plate and screws.

Cranial cruciate ligament rupture is the most common cause of hind leg lameness in dogs. As a result, TPLO surgery is one of the most common orthopaedic surgical procedures performed on dogs by Dr Joram.

What is the cause of cruciate ligament injury in dogs?

In most dogs, the cranial cruciate ligament (CrCL) ruptures as a result of long-term degeneration as fibres within the ligament weaken over time. The precise cause is not known, but genetic factors are probably most important, with certain breeds being predisposed (including Labradors, Rottweilers, Boxers, West Highland White Terriers and Newfoundlands). Supporting evidence for a genetic cause was primarily obtained by assessment of family lines, coupled with the knowledge that many animals will rupture the CrCL in both knees, often relatively early in life. Other factors such as obesity, individual conformation, hormonal imbalance and certain inflammatory conditions of the joint may also play a role. 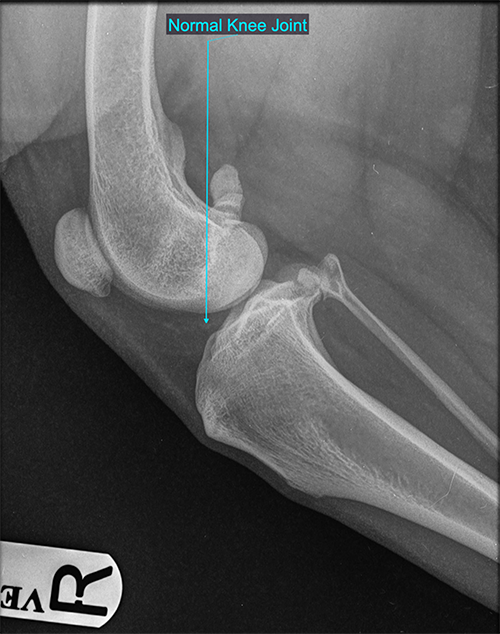 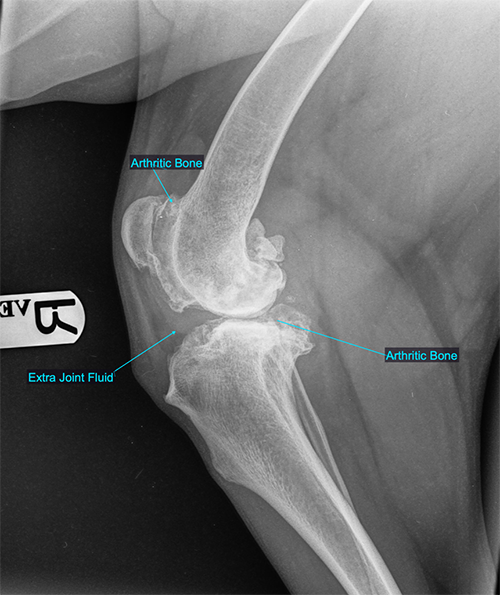 How does TPLO work?

Rupture of the cranial cruciate ligament causes instability in the knee. When the dog takes weight on the limb this instability allows the shin bone (tibia) to move forward relative to the thigh bone (femur). The knee feels as though it is ‘giving-way’ causing the dog to appear severely lame.

TPLO surgery aims to make the shin bone vertical to the long axis of the bone and, in doing so, prevent the shin bone moving forwards. The knee thus feels stable for the dog when weight-bearing, despite the fact that the ligament has been ruptured.

What are the Most common Signs that my Pet Needs TPLO Surgery?

Limping is the commonest sign of cruciate injury. It may appear suddenly, during or after exercise in some dogs, or it may be progressive and intermittent in others. It is possible to simultaneously affect both knees. These dogs often find it difficult to rise from a prone position and have a very “pottery” gait. In severe cases, dogs cannot get up at all and can be erroneously suspected of having a neurological problem.

What does TPLO Surgery Involve?

TPLO surgery is a major procedure with possible complications. Dr Joram recommends this is only performed in dogs where the benefits of surgery outweigh the possible risks and where alternative methods of treatment are less successful.

Dogs that are suitable for TPLO surgery are those with a ruptured cranial cruciate ligament that have persistent lameness and knee joint instability.

X-rays of the knee and shin bone are taken. Dr Joram assesses the presence and severity of osteoarthritis. He also measures the angle of the top of the shin bone to allow planning prior to surgery. From this he can evaluate the position of the cut on the bone, the amount the bone needs to be rotated, and the size of plate necessary to stabilise the bone in its new position.

Surgery may be performed on the same day as the investigations. Antibiotics and painkillers are administered at the time of anaesthesia and the hind leg is clipped from the level of the hip to the hock (ankle).

A small incision or cut is made into the knee joint to enable inspection of the structures within it. Many dogs with ruptured cranial cruciate ligaments tear one of the cartilage pads in the joint (menisci) and damaged portions need to be removed.

After cutting and rotating the top of the tibia, the bone is stabilised with a special plate that has been designed especially for tibial plateau levelling surgery. Some of the screws are “locked” into the plate which makes the repair stronger.

X-rays are obtained at the end of the operation to assess the new angle of the top of the shin bone and check the position of the plate and screws. Dr Joram recommends dogs stay overnight for monitoring. 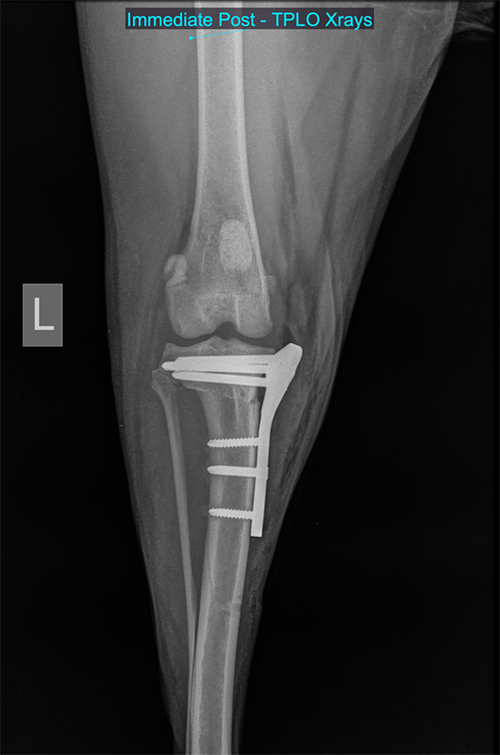 What can I Expect if my Pet Undergoes TPLO Surgery?

To allow healing, no exercise should be taken in the first few weeks. You can take you fur baby for toileting purposes.  To prevent strenuous activities such as running, jumping or playing, pet parents are recommended to keep their fur bay on a lead or harness. After a few weeks, exercise may be gradually increased in a controlled manner (on a lead).

Dr. Joram will do another check-up out six to eight weeks after the operation, to monitor the function of the leg and knee. X-rays are obtained to evaluate healing of the bone cut (osteotomy). Depending on progress, advice will be given about increasing exercise. Further clinical and radiographic examination may be necessary on an individual case basis. Full use of the leg is usually expected 8 weeks post surgery.

Below is a video of one of Dr Joram's patients 12 weeks post TPLO surgery. 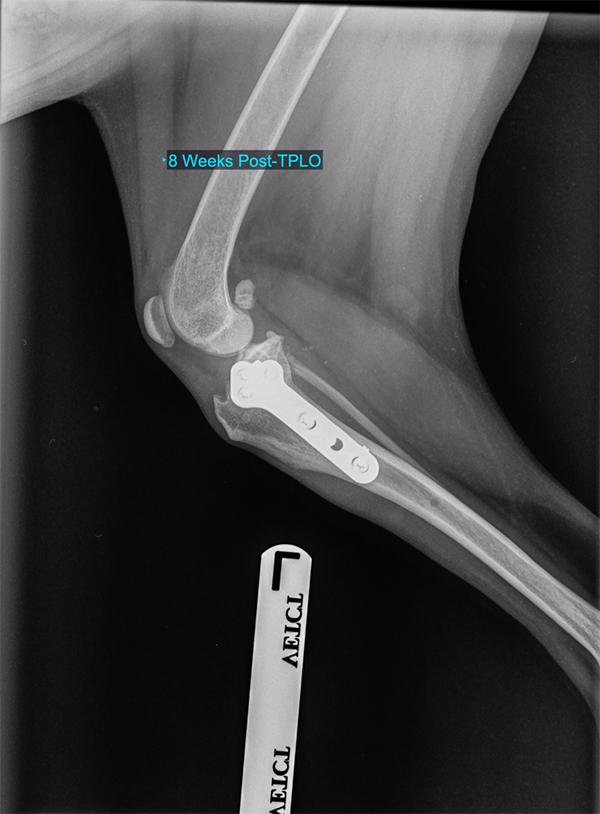 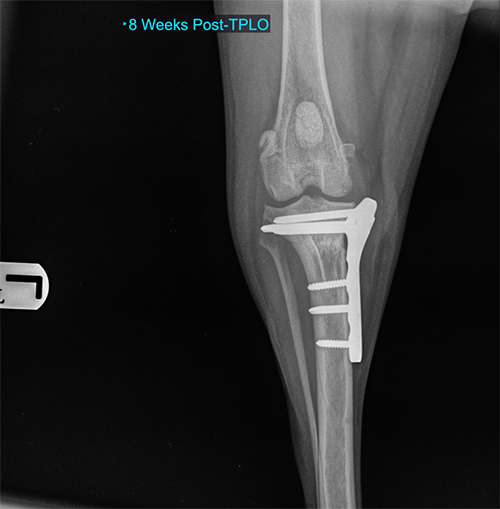 What are the advantages of TPLO?

Bone healing is more efficient than ligament healing. TPLO repair is considered the gold standard in bone repair as it is significantly more robust than surgeries designed to replace the damaged ligament. Dogs are more likely to gain a very reliable return of limb use, with all dogs expected to start weight bearing on the operated limb within 1-3 days. This is especially important for heavy dogs, athletic animals, animals presenting with mild lameness and in animals with Cruciate injuries affecting both stifle joints.

TPLO surgery is a major procedure. There are potential complications including infection, screw loosening and slow healing of the cut bone.

A small percentage of dogs that didn’t have an injured cartilage at the time of TPLO surgery tear it at a later date. A sudden increase in lameness usually develops and a second operation (keyhole or arthroscopic) is necessary to remove the torn piece of cartilage.

However, in the vast majority of patients that undergo TPLO surgery, knee pain is reduced and function of the limb is improved.